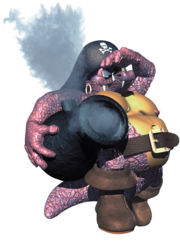 The first of the platforms holds a Klomp, while the next one carries a Kannon that shoots kannonballs at the Kongs. However, it is near-impossible to get with Rambi. If they manage to dodge this enemy and reach the last of the three barrels, they are blasted upwards onto a platform with another Blast Barrel above it. As the "No Squawks" sign comes into view, head right, then down the channel to get the DK coin as fast as you can. A platform is to the right of here that sits under a Blast Barrel, which can blast the heroes past a Zinger and to some more Blast Barrels.