Typically the 10th would run an Airborne course one year and a jumpmaster course during the next. Ina detachment of 10th Group trained the nucleus of the Nigerian Airborne forces. 10th special forces group challenge coin would typically take place during the summer months. The group headquarters moved to Fort Carson on 15 Septemberending a year presence in 10th special forces group challenge coin. This effort likely saved the lives of hundreds, if not thousands, of coalition service members. During the Battle of Khafjithe MTT accompanied the SANG forces into battle, coordinated troop movements, called in airstrikes, and assisted with artillery fire support. As part of its AT support, the 10th Group ran a two-week Basic Airborne course for new 11th Group personnel who were not yet Airborne qualified. 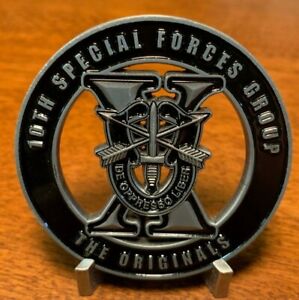